Advent Aircraft Systems, Inc. has successfully completed FAA flight testing of its eABStm anti-skid braking system for the PC-12 series. Once the STC is issued, it will mark the first time an anti-skid system will be available for the aircraft. The Advent eABS is currently certified for the Eclipse EA500/550, King Air B300, Textron Aviation Defense T-6B/C, with the King Air B200 pending. 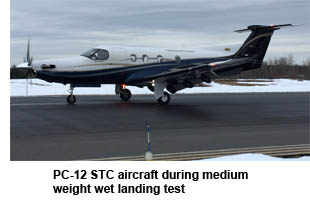 Company flight tests were conducted at Sanford Seacoast Regional Airport, Sanford, ME (KSFM) on Sunday March 26th, followed by formal FAA flight tests on Thursday March 30th. Peter Simpson, pilot in command for the FAA flight test, said "the new stopping performance of the airplane was remarkable and exceeded expectations, with excellent directional control throughout all test events. The technology of the system integrates perfectly with the PC-12." 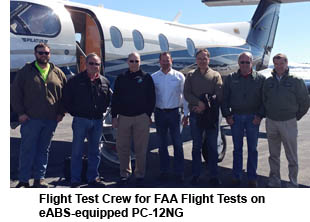 A total of sixteen hard braking events were performed at light, medium, heavy and maximum weight conditions over the two days of company and FAA flight tests. Events consisted of six landings and two accelerate-stops on each day. All events were performed using the same single set of tires and brakes, with negligible wear.

Reduction in maximum weight accelerate-stop distances equated to 620 feet in dry conditions and 520 feet in wet conditions, introducing a substantial new safety margin for operators in case of an aborted takeoff. The landing roll reductions and reduced risk at all weights offer the PC-12 operator an alternative or complement to the use of reverse thrust, particularly at lighter aircraft weights where the risk of damaging tires can be highest for airplanes not equipped with anti-skid brakes.

For certification purposes, Advent only had to demonstrate to the FAA the safe operation of the systems and that stopping distances for the PC-12 with the eABS installed were no worse than existing AFM values. However, subject to customer demand, Advent would consider seeking FAA approval for a revision to the AFM to incorporate the reduced stopping distances demonstrated during testing.

*Advent eABS is a trademark of Advent Aircraft Systems, Inc.